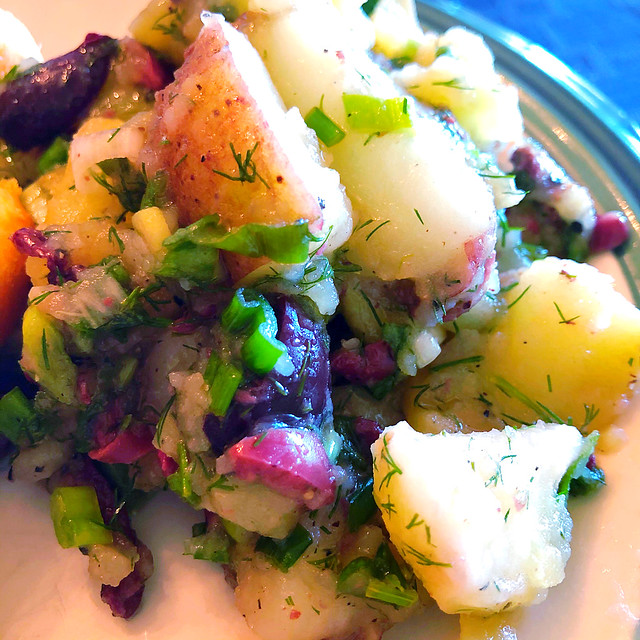 Quarter potatoes and boil until just done. Drain and cool.

Put potatoes in large bowl with scallions and olives, toss lightly. Dress salad and toss to coat each potato. Refrigerate at least 2 hours.

Serve cold with an optional dollop of mayonnaise. 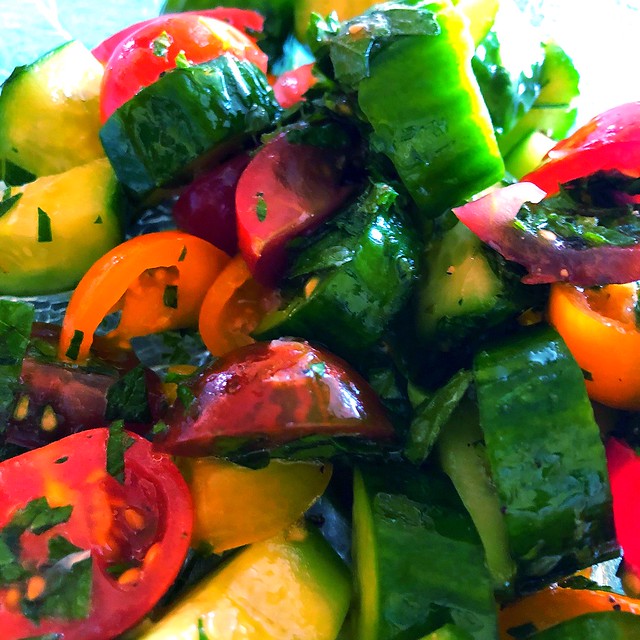 12 Middle Eastern cucumbers, or about 2 - 3 long English cucumbers, chopped into bite sized pieces
1 pound cherry or pear tomatoes, halved or quartered, according to size
8 scallions, finely chopped
1 bunch fresh mint, leaves finely minced
juice of 4 limes
1/2 cup olive oil
2 teaspoons honey
salt and pepper, to taste (I use about a teaspoon of each)

Place all the vegetables and the mint in a large bowl. Whisk the lime juice, olive oil, honey, and salt and pepper into a dressing. Toss the dressing with the salad. Taste to adjust seasoning, you do not want this too sweet; the honey is just there to balance the tartness of the dressing. It should not be tasted in the final salad. 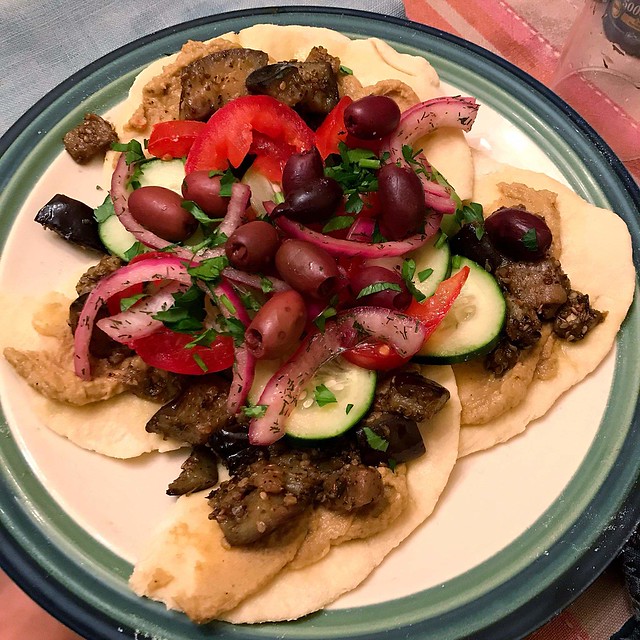 We made these a little differently than we normally do, because the za'atar blends that are available usually include sesame seeds, which Jerome can't have for quite a while. If we could get ahold of just the herb itself (which is a wild marjoram - some say oregano or thyme, it seems to cross all of them - and we are going to try to grow it this year), rather than the blend with other spices and seasonings, we could use that, too. This recipe can be scaled back or scaled up, as necessary. If you do make a quantity this large, you may wish to roast the eggplant, rather than fry it, but frying it is really tasty. Jerome has some cashew and coconut milk yogurt that we used for his gyros, and some vegan feta "cheese" that he used while we used a nabulsi cheese with nigella seeds in it and regular yogurt. We had the taratoor to go with ours, and he simply didn't use it. If you like, you can load these up with roasted or fresh pepper slices, kalamata olives, and other vegetables. It is a delicious way to get in all those vegetables, and is perfect for summer abundance. One of these days, I will share how we make our Turkish style flatbreads. They are a simple yeasted griddle bread, and are delicious.

Place the eggplant in a large bowl and rub with olive oil, za’atar, oregano, salt and Aleppo pepper until well coated.

To sauté: heat a bit more oil in a large, heavy skillet over medium-high heat. Add eggplant and cook for 10 - 15 minutes until very tender. To roast: Place the eggplant in a jelly roll pan, drizzle with a little more olive oil, and roast at 425˚F for 30 - 45 minutes, until they are very soft and shrunken a bit.

Combine the very thinly sliced onion, cucumber, vinegar, parsley and dill in a bowl. Let sit while you cook the eggplant. When you serve it, use a slotted spoon so you don't get too much liquid and make your gyro soggy.

To serve, place a flatbread on a plate, scoop some eggplant, some of the quick pickled vegetable mixture, sliced tomatoes, shredded lettuce, and drizzle with the taratoor and/or yogurt. Sprinkle some cheese and olives on top, roll it up and eat it. Some will fall out, but that will just make the beginning of your next one. 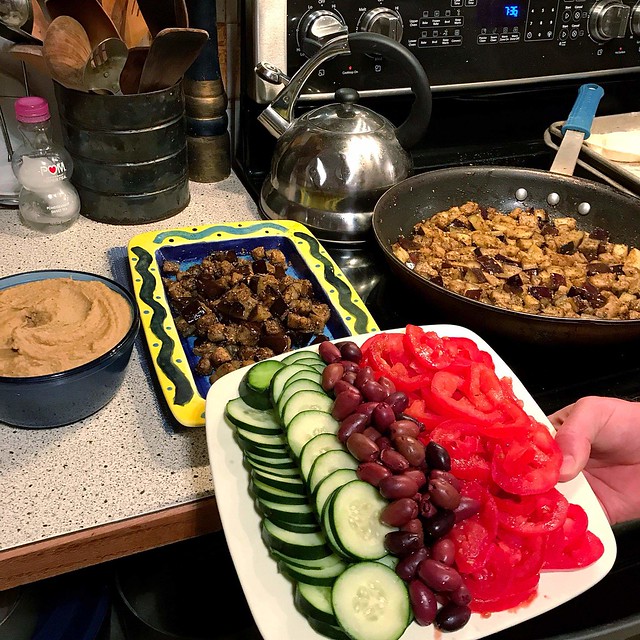