Craft On: Socks and Other Madness 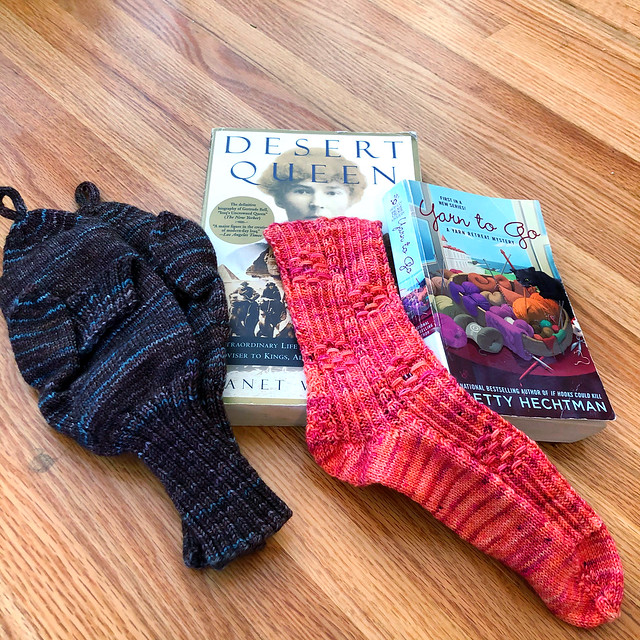 This is my third year trying to compete in Sock Madness. The first year, I made cheerleader, and that was great. Last year, between Elijah's seizure and all the restrictions, I just couldn't handle it, and didn't even finish the one sock to be a cheerleader. This year, I made cheerleader again, but it wasn't nearly as fun. Even in previous years, when there had been harder (for me) and newer to me methods, the designers had always been so kind and helpful, and this time, it seemed like everyone was so afraid of how difficult her patterns were, but in actuality, they were just fiddly. It is a beautiful sock. As soon as I saw smocking and beading, I knew it was going to be a challenge for me to finish in time, because both of those slow me down considerably. The pattern was written in an unnecessarily confusing manner, in my opinion, and there were one or two new techniques. I really liked the cast on, though it took me a bit to get the hang of it. It is both stretchy and firm, though, and that is useful in a sock. Besides that, it was just following the pattern, but there were random underlined parts, the transition rounds were not placed together, and the heel gusset (which is great, and I can see many ways to use it in other socks) was written in a way that caused all sorts of questions, when it could have been written in a little more clear way, which probably would have reduced the number of questions which seemed to annoy her. I normally don't like to say anything bad about other designers but, in this case, the few unclear parts and the one missed instruction right at the end were really not the issue. It was the sarcasm and rudeness that met people who had legitimate questions (even if they had been asked numerous times by other people, since there are thousands of posts in the chat - as of this moment, there are 11718 and climbing - and sometimes you miss a post or don't use the right search terms to find something). I observed this kind of rudeness with other participants, repeatedly, and eventually resigned myself to "silent" searching for clarification and trying not to ask anything. It made the experience lesser than previous years have been.

In previous years, even when I had obvious ignorance, or saw it in others, the responses have been kind. Sometimes a bit abrupt or direct, but never rude or sarcastic. It sucked the fun out of it for me this year. Never before this year did I see someone told that he or she was too lazy to read the pattern when asked about a clarification (I saw this directed at someone who was not being rude and was simply explaining how he had to figure it out to understand). So, while the design is gorgeous, I am still a bit annoyed with it. The heel gusset, as written, was too shallow for me, even though the fit is otherwise perfect on the leg and foot, and since one of the rules is to knit it to specifications, I couldn't fiddle with it to make it a little deeper, which I would do if I were to knit something like that again. Instead, they will go to Mariam. After I have a little break from this pattern, and can look at it without being annoyed about the qualifying experience. Once the second sock is knit, Mariam will have a perfect, flowery, beaded pair of socks that will thrill her. In the meantime, I had to really force myself to read in the cheerleading thread, and I don't know if I will ever participate again. I'm taking some deep breaths and enjoying the new patterns, especially since I can knit them to my preference and fit.

Have you noticed in the predominately female led fiber world that people think it is mean to expect professionalism from dyers/designers/yarn producers? I remember seeing it when I was part of a yarn club which had numerous delays and little to no communication regarding the delays (the news only came when people pressed them for it). When people asked what was going on, politely, they were told that the company was run by these women and they were "nice" and it was "mean" to ask these things, because they were working hard, and trying their best, and it would hurt their feelings. We had all paid a significant amount of money for the yarn club and this was not a favor being done between friends. They run a business. It is their job to communicate with their customers. I'm seeing this on the Fiber Social Media that shall not be named as well. Even though the owners are running a business, and they are paid and make money off of it, we are supposed to pretend we are all buddies and so no criticism is allowed. I have to admit, I am a bit fed up with it. Again, I am trying to take some deep breaths and let it roll off of me, but I'm also rolling my eyes.

Anyway, I am so close to finished with Alexander's convertible mittens. Actually, technically, they are finished, but I am not happy with how I attached the button loop. I didn't make a note of how I did it on the first one, because it seemed so simple, but I have redone this twice, and I am going to undo it and try again tomorrow. I have a simple, vanilla sock on needles, and have the second of three mittens in progress for Basbousa. Because I want to make it for MalMarch, I am casting on a cloche hat for a fall design tonight. There are a few days left in our Around the World Stitch-Along, and it has been so much fun. The projects made by our participants have been gorgeous and amaze me with their skill. What are you knitting?

The kids and I finished Jo's Boys, and I am almost finished with Desert Queen. My weekly study and prayer group has only one more week before we finish Songs of Praise, and we are trying to decide what study to do next. I have three or four here, and am hoping they will have some suggestions, as well. As I need a little light reading, I picked up another happy, little murder, Yarn to Go, which is fun and silly and what I need for a break. What are you reading?

If you would like to receive updates and early notice of new patterns, beta knitting opportunities, and great discounts (plus pictures of new yarns, new tools, fun places, neat hints, book ideas, recipes and more) each month, please subscribe to 1,001 Knits. My best, and sometimes my only, discounts go to my subscribers.

Labels: Around the World Stitch Along, Books, Design, Governor Inslee Needs a Frozen Fish to the Forehead, Homemaking, Knitting, Sock Madness, Yarn Along