Recipe Round Up: Shakshouka and Kofta bil Bayd

This dish is often mistakenly called Israeli. While it is true that it is made and eaten there, its origins are in North Africa, in Tunisia. It is an egg dish that uses a spicy tomato sauce, along with sautéed onions and peppers, as the poaching liquid for eggs, often topped with a brined cheese similar to feta (usually feta is substituted for the Arabic cheese here), and the Sicilians borrowed that dish to make a similar meal called eggs in Purgatory, with the eggs simmered in a spicy tomato sauce and covered with grated parmesan or Romano cheese. Jews who lived in Arab and Northern African countries also learned how to make this dish and Israelis make it now, too. It is eaten for breakfast in the Middle East with a flat bread or pocket bread to sop up the sauce, but with that same bread and a salad, makes a lovely dinner. (Mexican huevos rancheros are also similar, and may have come about because of the Spanish colonists who, aside from hailing just across the Mediterranean from this dish’s countries of origin, they were also occupied by the Moors for quite some time and probably learned it directly from them). This recipe serves six, and can be halved or third-ed. We usually double this.

Heat an oven safe skillet (not cast iron, unless it is enamel coated) over medium-high heat, then add the olive oil, and immediately follow with the onions, cooking until they start to soften. Add the peppers and cook until the onions brown and the peppers are soft. Add the garlic, cumin and paprika and stir for about a 30 seconds. Stir in the tomato paste and mix well to dissolve into the base of vegetables and aromatics, cooking another minute or so.

Add the canned tomatoes with their juices, stir and bring to a simmer. Add salt and pepper and mix into the sauce. Reduce the heat to maintain a gentle simmer, and cook for about 5 minutes to concentrate and blend the flavors.

Make six wells in the tomato pepper base with a large spoon and gently pour the eggs, one at a time, into each well. Gently spoon some of the sauce over the eggs to contain them and maintain their shape. Sprinkle each egg with salt and pepper, as you like.

Simmer in the sauce for about 8 minutes, until the whites are set and opaque and the yolks are still a bit runny, but raised. The residual heat in the sauce and pan will cook it longer, so be careful not to over cook.

Sprinkle with the feta cheese and place in the oven under the broiler for about 2 minutes. Remove from oven carefully and sprinkle with cilantro. Serve with the hot sauce passed at the table and bread to scoop up the egg and sauce. 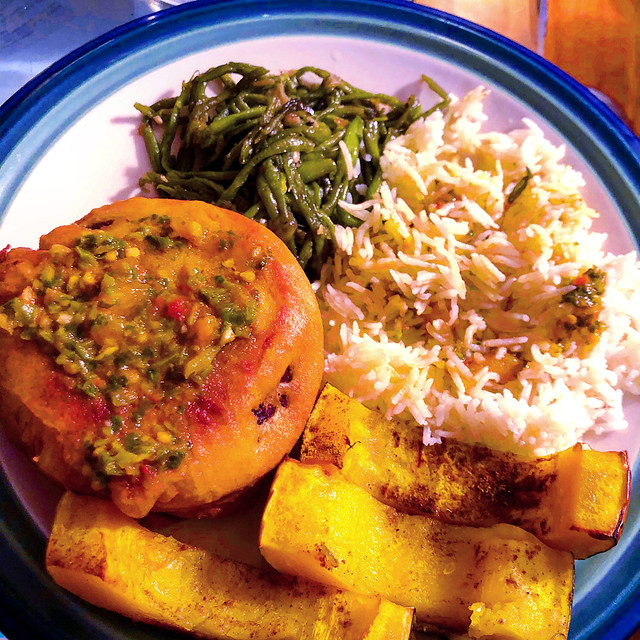 This is something my mother occasionally made when I was growing up, and I realized I hadn't made it for most of our children. The recipe was my attempt to recreate what I ate growing up, and I think it turned out well. Middle Eastern food is supposed to be made small and dainty, and the first batch I made of these were rather large. You can make them either way, but I think making them half the size I made in the photos is probably the largest I would make them. Also, you can make the kofta ahead of time and then dip them in the batter and fry later. I wouldn't make the kofta more than a day in advance, but they come together quickly enough that you can do it all at once, too. The recipe is as I served my family; if you make half, it should serve a smaller family with a few left over.

Place meat in a large bowl. In a food processor or grinder, grind/purée the parsley, cilantro, onions, garlic, salt and pepper. Add to the meat and mix thoroughly. Mix in the rice flour.

Form into small patties, about 30 - 40, and set on a platter. Set aside or refrigerate.

Whisk or blend the eggs, milk, flour and salt. Just before dipping the meat, blend in the baking powder.

Pan fry the meat in batches in a large skillet over medium-high heat, filled about half the height of the meat with water, until the water evaporates. Turn meat to brown on both sides. Remove to a plate. The meat does not need to be completely cooked through. 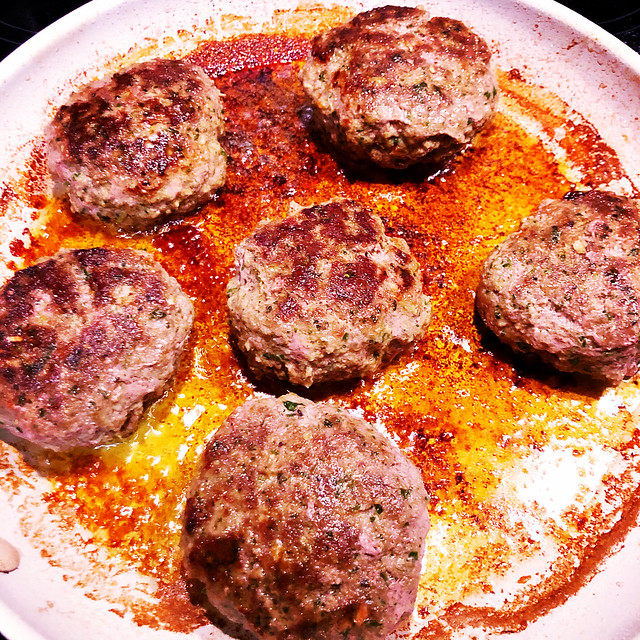 Heat oil in a skillet with high sides over medium-high heat until bread sizzles when dipped into it. Prepare a jelly roll pan or something similar with a cooling rack set over it to drain the kofta.

Carefully dip each patty in the batter and slip into the oil to fry. Many people say not to crowd oil when frying, but I find that having higher sides than you think necessary and filling it as much as you can with the food to be fried keeps the food from browning too quickly and being raw inside. Just make sure you do not over fill with oil, so it does not spill and burn you. When the batter is golden on one side, turn, to brown on the other side, and remove to prepared rack over pan. Repeat for all the meat. 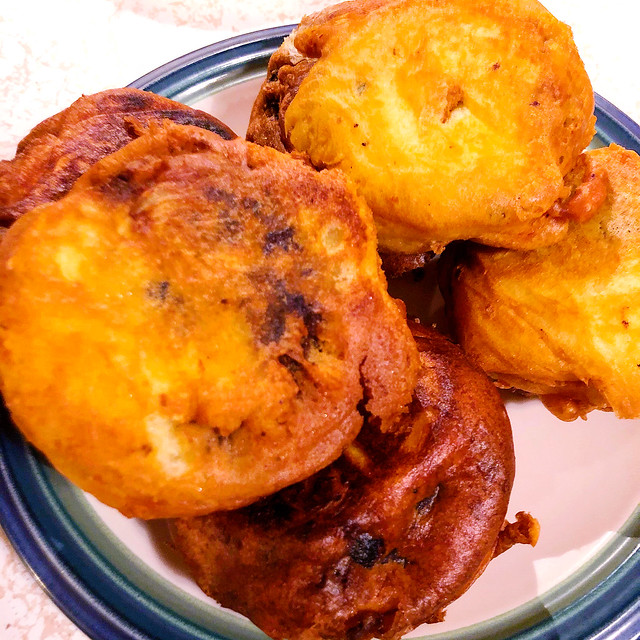 Serve with basmati rice (or Arabic Style Rice Pilaf) and/or bread (such as Khoubz Araby or Tamis), salad, other veggies, and Taratoor and/or hot sauce (like Harissa, Duqqus, or Sah'awiq).