Recipe Round Up: Fresh Blueberry Pie 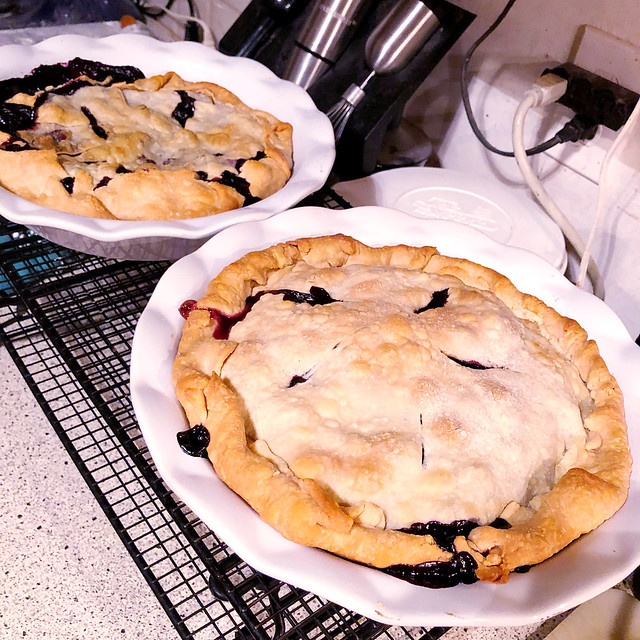 It took me a long time to love blueberries. When I was a child, they really weren't my favorite, anyway, and I much preferred blackberries, strawberries and raspberries (which I still do, to be fair), but working on a blueberry farm one summer to try to make spending money to have for a trip to summer camp in Switzerland (I was a scholarship, two years in a row to what we call nerd camp) cemented my hatred of them. The kids there were all country kids who had grown up knowing each other, which is hard enough when you are 14 and self-conscious and feeling awkward. It's worse when they are all cliquish and exclude you. Nobody would even eat lunch with me when we had our breaks. They sat amongst themselves and talked about older siblings, school friends, family they had all grown up with, and I was the townie kid who was also a brown, daughter of an immigrant, while they were not, and it felt like just one more thing that made them not want to know me. I remember vividly them talking about one of their older sisters and her wedding that was coming up, which of course they were all attending. Nobody even seemed to think that it was rude to talk about all of those things in front of me. Or maybe they did, and that was the point. In any case, picking blueberries was hot, tiring work, and I didn't even have anyone I could talk to or joke with there. I had the last laugh, though, because all they got to do that summer was go to that girl's sister's wedding, and I went to Europe. So, there is that.

Anyway, it wasn't until I was an adult that I really appreciated blueberries, and their floral flavor, and the fact that they are dead easy to freeze for the winter. Rich requested a blueberry pie this week, when I asked if there was anything specific he would like me to do with the last box of blueberries we picked up, and so I made him two. This is how I did it. I used some bags of leftover pie crusts from our freezer, and only had three, so I stretched them to fit two double crust pies, which you can see didn't really work, but it tasted fine and nobody minded. Also, it is a pro tip to make extra pie crusts, or to take your trimmings, and working as little as possible, make them into flat rounds you can freeze to use on leftover chicken and vegetables or to make a quick fruit pie.

Roll out your pie crust and line a pie pan with one crust. Fill the crust with the blueberry filling, and dot with the 2 tablespoons unsalted butter, cover with top crust and crimp edges.

Bake for about 55-65 minutes, until the filling is bubbly and the crust is browned, but not burned. Allow to cool to at least room temperature before cutting. We never actually do that, and just burn our tongues on runny pie filling, but it is delicious.

Labels: Homemaking, Keeping the Feast, Recipes, Tales from the Kitchen