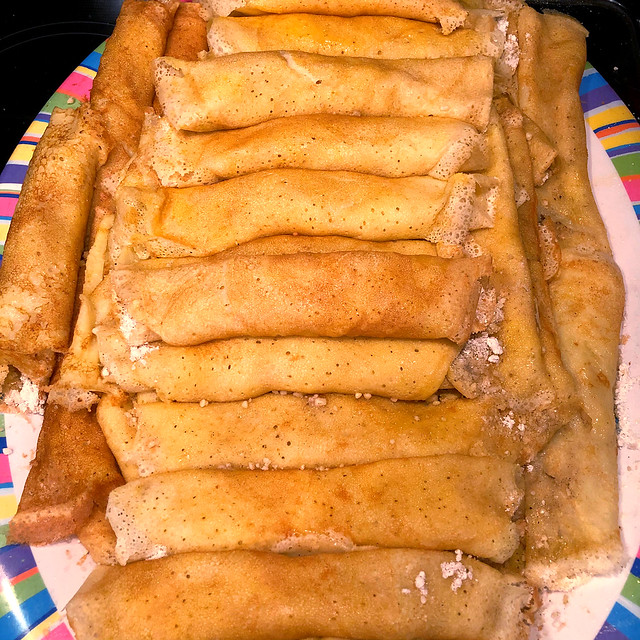 I need to apologize a little for this recipe, because so much of it is done by sight and feel and practice. My mother never measures anything at all, and she had a friend who insisted she needed an exact recipe, so she measured every ingredient she put in and every addition she added to adjust. Well, that friend has it, but my mom lost that, so when I asked for the recipe, I got her general instructions which included how many eggs and how much flour, along with the other ingredients that went in with no quantities. I spent several tries recreating what I ate growing up, and these taste like what I had as a child. There are a lot of pictures to give you an idea of what you are looking for, though, which I hope will help you. These are a bit like the Arab answer to crèpes. The batter needs to be thinner than you think, and the first few you cook will be weird and you can just fill them and eat them in the kitchen while you are adjusting the batter for the rest.

3 sticks unsalted butter, melted, for brushing the pan and the crèpes.

Blend all batter ingredients except baking powder. Let rise an hour or two on the counter or covered in the refrigerator for up to four hours. Don't try to save time by making it ahead of time and putting in your fridge, no matter how much room there is in your bowl, and leaving it overnight or it will overflow all over the shelves. Ask me how I know.

Prepare the filling by mixing the powdered sugar, ground almonds, and cardamom. This can stay in a sealed container on the counter for a couple weeks.

When you are ready to cook the pancakes, sprinkle in the baking powder and whisk well. If the batter looks too thick, add some more milk and whisk again. Arrange an assembly line with the batter, pan, melted butter, filling, and the serving platter to make your work easier.

Heat a six inch pan over medium high heat. When the pan feels hot with your hand held above it by an inch or two, brush the pan with butter and pour about 1/4 - 1/3 cup of of the batter in, while swirling around to spread it around the entire surface of the pan. Reduce heat to medium and cook it until the edges just start to brown and separate from the pan, then place your spatula underneath and flip to cook just a few seconds. After your first one, adjust the batter if necessary. You do not want a thick pancake, this is thin, thin, thin. I almost never re-butter the pan, though when I make an extra large batch, I sometimes have to do it one or two more times. 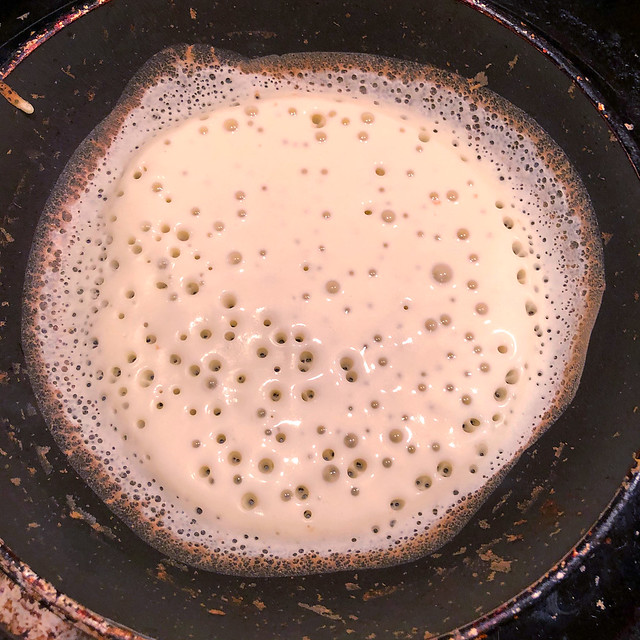 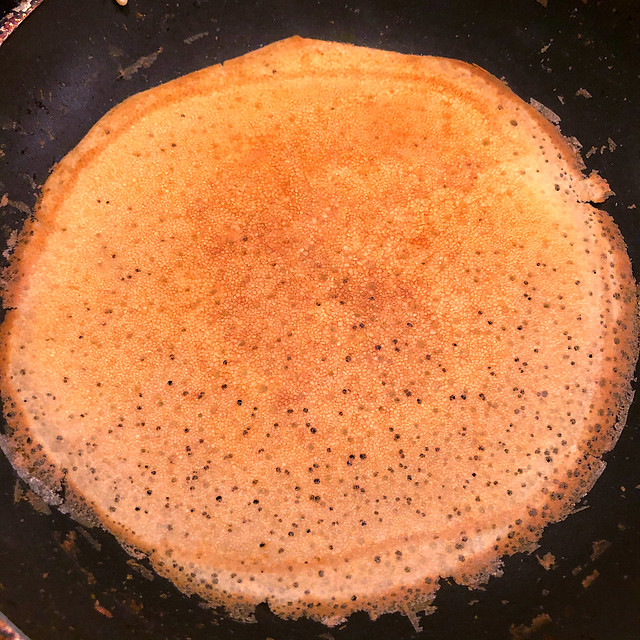 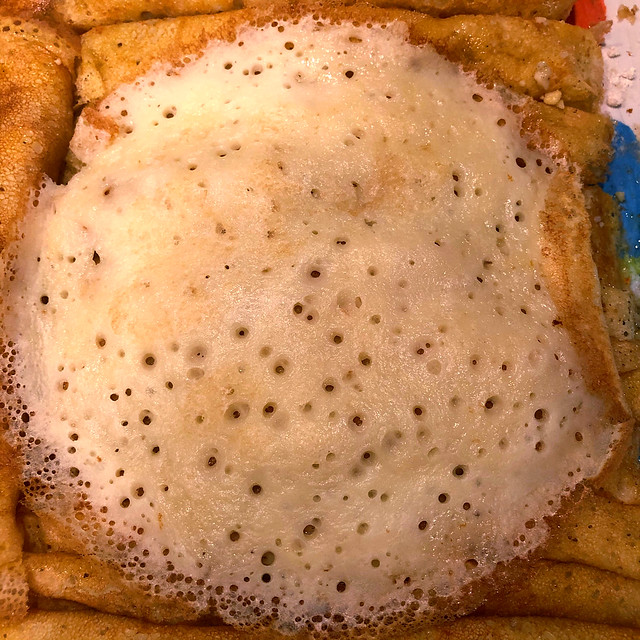 ready to be brushed generously with butter 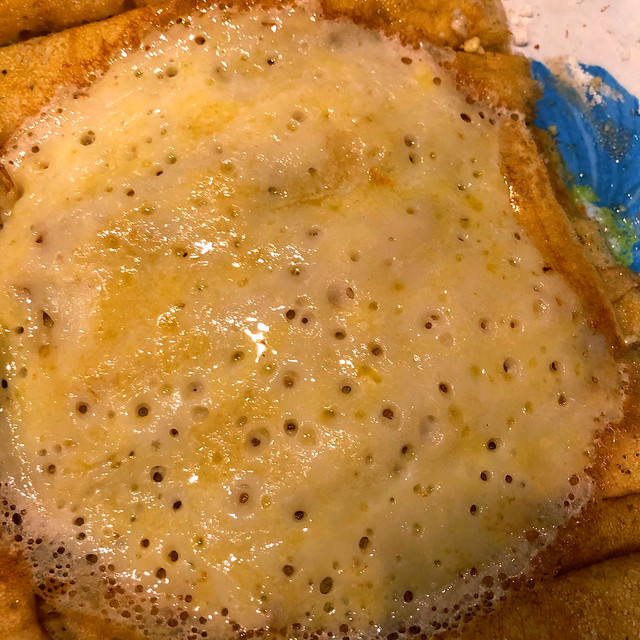 the right amount of butter 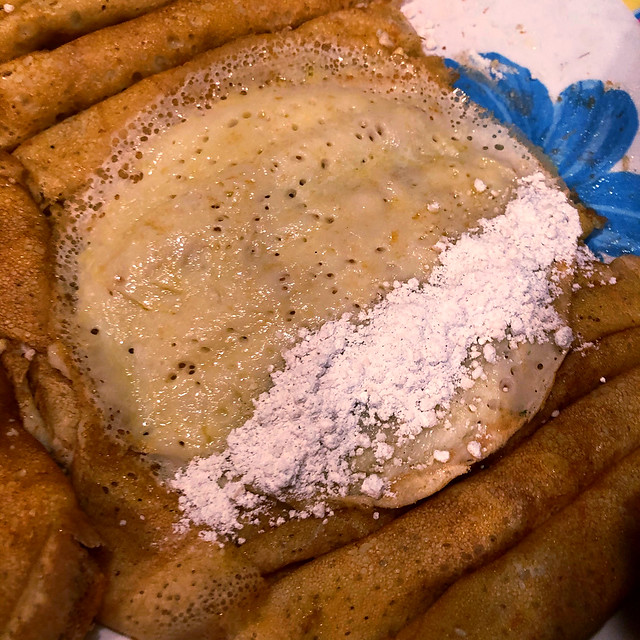 about the right amount of the sugar and nut filling 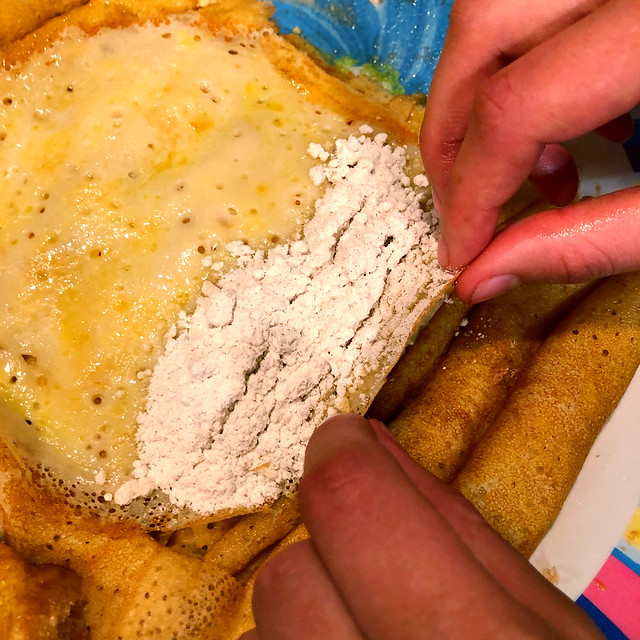 beginning to roll
Serve warm or cold. These are great for breakfast, too. This recipe should make about 30 - 35 gatayif. 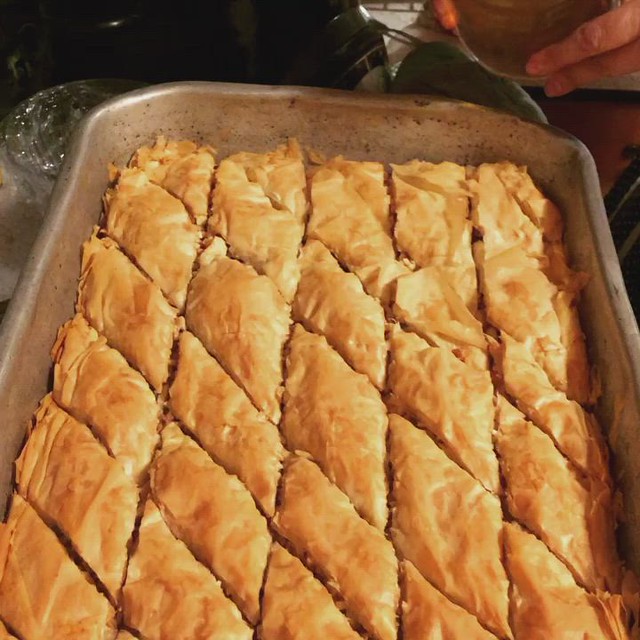 Everyone seems really intimidated by making this, or working with phyllo dough. It really isn't difficult, and is more a matter of assembling and working quickly than anything else. In my opinion, this is better when you assemble it ahead of time and refrigerate and then bake it fresh later. The chilling of the dough and butter improves the texture. There is only one real secret to this, and that is that you need to either use hot pastry with cold syrup or cold pastry with hot syrup. Otherwise the pastry becomes soggy. Click on the photo above and you can see me pouring the syrup on the pastry and hear the sound of it hitting the hot phyllo. You can make the syrup and refrigerate it a week in advance. Also, if you can get your phyllo dough at a Greek or Arabic store, it will be wider and fill your pan better.

Place sugar, water, and cardamom pods in a larger than necessary saucepan. Bring to a boil over high heat, stirring only to dissolve it, then letting boil over medium high heat for about 5 minutes. Take off heat and let cool. Stir in the rosewater and refrigerate.

In a large frying pan, over medium high heat, heat the almonds and butter, stirring constantly. As soon as there is any browning whatsoever, turn off the heat and add in about a third of a cup of the syrup, making sure none of the cardamom pods fall in the pan. Stir well to mix. Set aside.

Brush an 11" X 15" pan with some of the melted butter. Unroll the package of phyllo dough. Most people recommend that you keep it covered with a wrung out damp cloth. I don't do that, and just work really quickly, but if you are new to this, you might want to have that damp cloth handy. I use a brush for the butter, but a friend said that she fills a mister or spray bottle with the butter, which I thought was brilliant.

Working quickly, lay two sheets of the phyllo down on the buttered pan. Brush generously with butter. Repeat three or four more times. You are going to use a little more than a third of the package for the bottom and top, and about a quarter for the middle. Sprinkle evenly with half the nuts.

Using a blunt butter knife, press the edges of the dough down to tuck into the pan. Using a sharp knife, cut all the way through the pastry as below. You can either bake at this point, or cover with plastic wrap and refrigerate a day or two. 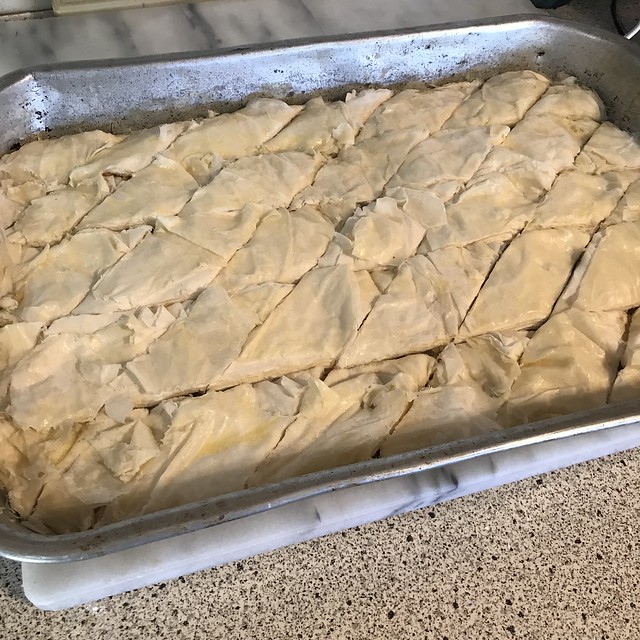 unbaked baq'lawa scored before baking
When ready to bake, preheat oven to 375 F. Unwrap your baq'lawa and bake uncovered, 35-45 minutes, until golden brown all over. Fish out the cardamom pods from the syrup and pour the cold syrup over the pastry, aiming as much as possible for the cut edges. Allow to rest about 15 - 30 minutes for the syrup to be absorbed. 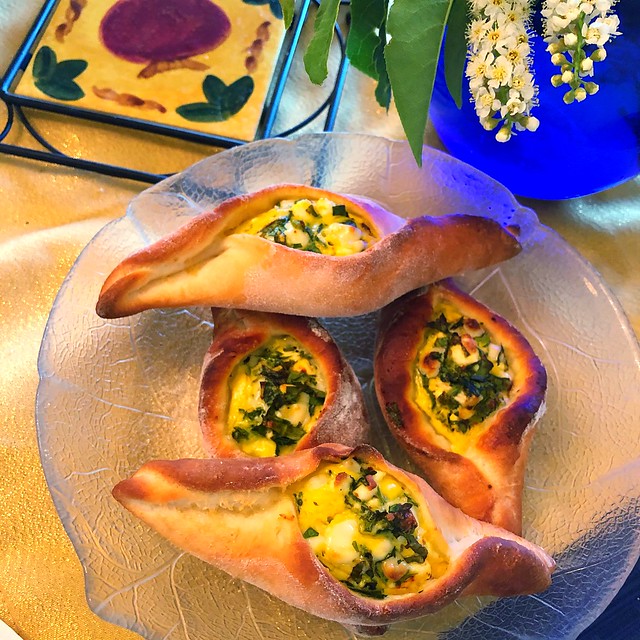 So, though I grew up eating these, I never really saw them made at home. It was always something that someone else made. I really wanted to make them for the family, though, so I kind of figured it out on my own. These use the same dough as the fatayir bi sabanich. I meant to take pictures of this, but forgot, so I will have to make them again and show you the shape that way.

Prepare a baking sheets by sprinkling with semolina or cornmeal. Divide the dough into about 50 pieces and roll into long, flat ovals. Spoon filling into the middle, leaving about a half inch border around it. Shape into an "eye" or a boat, by folding one of the short ends over and pressing down on the dough on the other side. Then, fold that side back over and pinching to adhere the dough. Do the same on the other side, beginning with the side you finished with on the other end. You want to leave a small amount of the filling exposed, because the dough will open more as you bake it.

Preheat the oven to 425 F and allow the fatayir to rest while the oven heats. Bake for 15 minutes. Serve warm or cold. 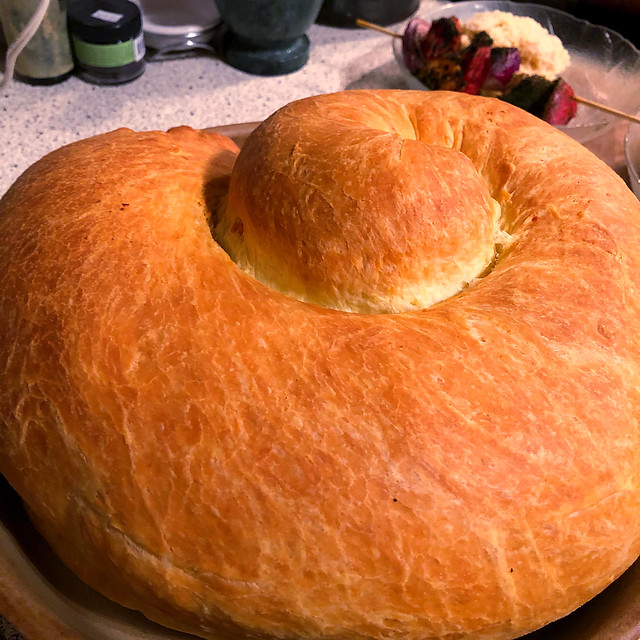 This is a recipe I found online, and changed a bit for our family. I'm sure this recipe would have used pancetta originally, and someone's Italian grandmother came here and used what she could get. It's very much Italian-American. This can easily be made in a stand mixer, too, though it is possible to make it by hand.

Mix flour, yeast and salt. Add milk, olive oil, and butter and blend thoroughly. Add eggs and mix in completely. Knead on a floured surface for about 5 minutes. Divide into two balls and let dough rest for about 10 minutes.

Working with one piece at a time, roll out on lightly floured board to about 12" X 24" rectangle. Sprinkle half of the cheese and half of the bacon evenly over the surface of the dough, leaving about a 1/2" border around all edges. Beginning at the long edge, roll up dough tightly into a cylinder. Coil into a tight spiral and place into a greased cake or pie pan. Repeat with the second ball of dough and remaining cheese and bacon.

Brush with melted butter, then cover lightly to rise for 1 - 2 hours, until the volume doubles.

Preheat the oven to 350 F. Bake loaves for 35 - 40 minutes. Cool on racks and serve. This can be made the night before and served for breakfast. 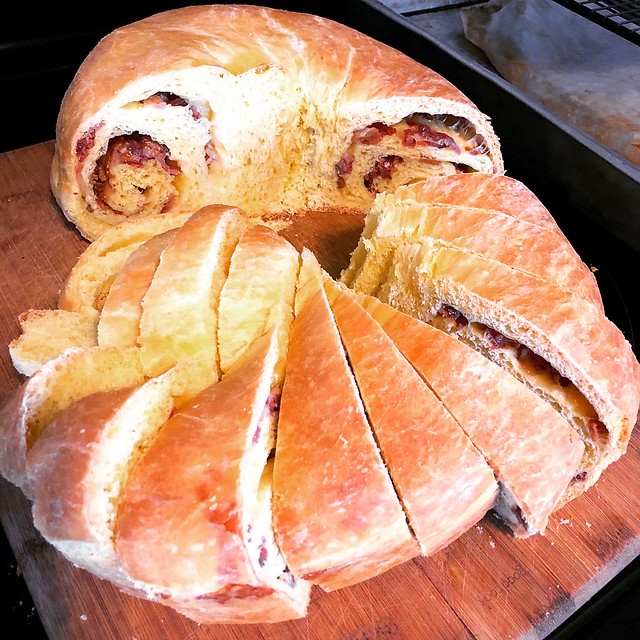 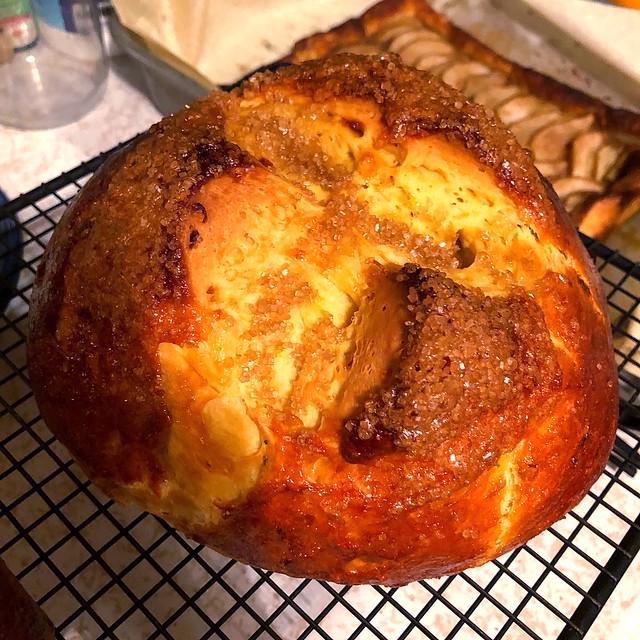 This is a traditional Paschal bread made in Croatia. I wasn't posting when we went to Croatia, but we did, and fell in love. We would move there tomorrow, if it were possible. I tried to bring some of it home for the kids by making foods we had there. This recipe is traditionally made with rum to soak the raisins, but I kind of wish I had used the naranča (orange liqueur) we brought back with us, which I have been rationing out for the past year and a half. Maybe next time. A lot of the time, I tell you that recipes are not as hard to make or don't take as long as you might think. Well, this one isn't difficult, but it does take a long time. The dough rises four times, but you will not regret the time taken on this, and you can go read a book or pick up your knitting or do any number of things in the time the dough is rising. I make this dough in the bread machine to save me some time, but it can be made by hand or in a stand mixer just a easily.

Soak sultanas in the liquor for at least two hours. Set aside.

Whisk 3 egg whites and 1 tablespoon of melted butter together for glaze.

Remove from pan and punch down over very lightly floured surface. Divide in half and shape into balls on greased parchment on baking sheet. Brush with egg glaze.

Cover with plastic and allow to rise for 1 hour. Brush with glaze again and cover, allowing to rise for another hour.

Brush dough with glaze again and use sharp scissors to either make two deep snips in the shape of a cross or three deep cuts like I did, meeting in the middle of each of the loaves. Sprinkle with coarse sugar and allow to rise again while you preheat the oven to 350 F. Bake for about 30 minutes, until well browned and hollow sounding when tapped on the bottom.

Cool completely on racks and serve in slices spread thickly with butter.

Labels: Homemaking, Keeping the Feast, Recipes, Tales from the Kitchen