Yarn Along: Gift-A-Long and Pattern Profiles

In case you missed it: Saint Nicholas is released - and you still have time to knit it if you hang stockings for Christmas (or work on the pattern for next Saint Nicholas Day)! In honor of Saint Nicholas, whose feast is today, I have the pattern on sale for 25% off through 12:01 a.m. PST on November 7. That's tonight!

Saint Nicholas brought me a knitting mug filled with fancy chocolates and a reindeer stirring spoon. The kids are pretty convinced that Saint Nicholas loves me best, but hastened to tell me to tell others that this was perfectly alright with them.

As for my knitting, I have finished Desert Pines and I'm nearly finished with Victoria Station. Both are gifts, so I am not going to say too much more about them (I did start another project, too, but I'll have more to say about that next week). Both are patterns I picked up as part of the 2016 Indie Designer Gift-a-Long, too. This is my first year participating, both as a knitter and a designer, and I've already won a pattern in one of the random trivia games! Check it out: Passerine Stole by Jen Lucas
I'm going to be highlighting a pattern or two by participating designers each week to entice you to join the fun. You have until 11:59 pm EST on December 31 to get in on it! (And you can win prizes, too!) Aside from the gorgeous items you will find in Jen's Ravelry shop (and you did peek at her designs, right?), this week I'm profiling: 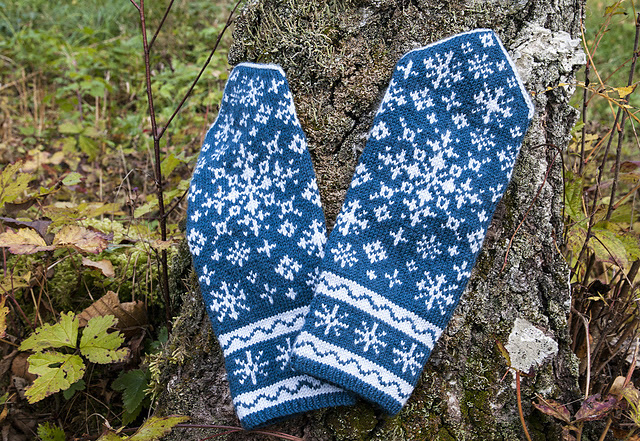 First Snow Mittens by Aet Terasmaa
I love all things snowflake, which is odd given my loathing of cold and snowy weather. Maybe not, as I like snow you visit, because it is pretty, and then leave to go to your warm home. So, knitted and crocheted or embroidered snowflakes, as they bring no cold or wet with them, are perfect. Anyway, look at these mittens, and then take a gander at her other patterns. You are sure to find something you like in her shop.

Speaking of patterns, for the past few years I've found Interweave Knits a little less exciting than it used to be for me. There were still great patterns, but the paper of the magazine was thin and tore easily, and a lot of the patterns seemed more simplistic than I used to find in it. The magazine I loved included a range of patterns in different skill levels, with at least a few in each issue that were aspirational, and challenging, or taught a new technique. So, the Interweave Knits Winter 2017 issue is the first one I've bought in a while. I let my subscription lapse, but when I saw the preview of this magazine on Ravelry, I fell in love with several of the patterns. This is much more like the magazine I knew and loved. The paper is improved, though still not the thick glossy paper it used to have. The new editor has been at the helm for a year, I think, and it looks like she's done an excellent job at picking articles, as well as patterns. The holiday issue also looked interesting to me. So, I've been looking over the patterns and reading the articles this week.

Mostly, though, we have been watching this series. I picked up the DVD set from our library. Although we enjoyed some of the "house" series, like Frontier House and Manor House, most of them were like reality shows with people who didn't really want to try to live as the people of those eras actually lived. This series (and there's a Victorian and War Time Farm series, as well a Victorian Pharmacy, and several others) is done by a historian and a couple archaeologists, so they are at least knowledgeable and trying. I caught a food science error in one of the episodes, but it may have just been poor communication. Anyway, everyone in the house is enjoying it, and learning quite a bit.

Also posting to Keep Calm and Craft On.

Comments:
Those first snow mittens are gorgeous! I will have to try and find Edwardian House. I love those series', even if they aren;t perfect, lol.

I agree about the imperfect historical shows. I love them, even with their imperfections.